The International Conference on the Great Lakes Region (ICGLR) is an inter-governmental organization of the countries in the African Great Lakes Region. Its establishment was based on the recognition that political instability and conflicts in these countries have a considerable regional dimension and thus require a concerted effort in order to promote sustainable peace and development. Most notable among the conflicts that have had cross-border impacts or origins are the 1994 Rwandan genocide that led to the loss of more than 800,000 lives, and the political instability in DRC. These conflicts constituted a major threat to international peace and security.

Its founding history began in 2000 when the United Nations Security Council, as stated in its resolutions 1291 and 1304, called for an International Conference on peace, security, democracy and development in the Great Lakes region. Later that year, the Secretariat of the International Conference was established in Nairobi, Kenya, under the umbrella of the United Nations and the African Union.

In November 2004, the eleven Heads of State and Government of the member countries unanimously adopted the Declaration on Peace, Security and Development in the Great Lakes region in Dar es Salaam, Tanzania. This Dar-es-Salaam Declaration presented a political statement with the intention to address the root causes of intractable conflicts and constraints to development in a regional and innovative approach.

The Heads of State and Government convened once again in Nairobi in 2006 to sign the Pact on Security, Stability and Development in the Great Lakes Region. The Pact included the Dar es Salaam Declaration, Programmes of Action and Protocols. This marked the end of the preparatory phase and ushered in the implementation period.

The ICGLR Executive Secretariat celebrated its inauguration in May 2007 at its headquarters in Bujumbura, Burundi. Its responsibility is to coordinate, facilitate, monitor and thereby ensure the implementation of the Pact in order to attain peace, security, political stability and development in the Great Lakes Region.

In addition, the Conference addresses Cross-cutting Issues such as Gender, Environment, Human Rights, HIV/AIDS and Human Settlements. There are two main principles that guide the approach of the ICGLR. First, a sustainable solution for peace, stability and development in the Great Lakes Region has to be based on strong ownership of the countries of this region themselves. Second, the ICGLR is based on partnership with stakeholders, in particular the Group of Friends and Special Envoys which provides financial, diplomatic, technical and political support.

The Group of Friends and Special Envoys is co-chaired by Canada and the Netherlands. Its member countries and organisations include Austria, Belgium, Canada, China, Denmark, the European Union, Finland, France, Gabon, Germany and Greece. Others are the Holy See, Ireland, Italy, Japan, Kuwait, Luxembourg, the Netherlands, Nigeria, Norway, Portugal, Russia, South Africa, Spain, Sweden, Switzerland, the United Kingdom and the United States of America.

In order to ensure the rightful implementation of its projects and protocols the ICGLR brings together experts and authorities from its Member Countries to meet on a regular basis. Twice every year, the Regional Inter-Ministerial Committee (RIMC) as Executive board of the ICGLR to assess the progress that has been made. The Summit of Heads of State which is the supreme organ takes place at least once every two years. In case of emergency the Chair of the Summit may call for an extraordinary Summit of the Troika. This emergency caucus comprises the Chair of the Summit, his/her predecessor and his/her successor and thus includes representatives of three member countries.

On the national level, each of the Member States has put in place a National Coordination Mechanism (NCM) also including representatives of civil society, women and youth in order to ensure the follow up and implementation of decisions made by the Summit and the RIMC. 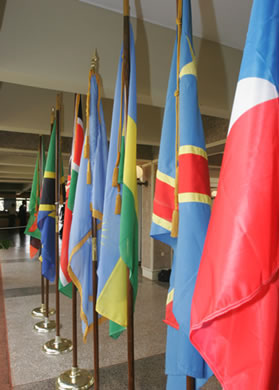