Biography of the Deputy Executive Secretary 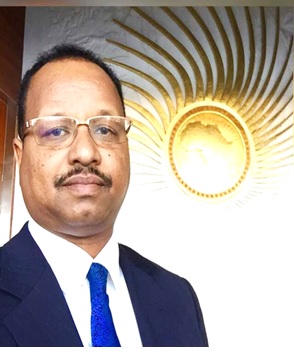 Ambassador Yasir Ibrahim Ali Mohammed is a Sudanese career diplomat and was appointed Deputy Executive Secretary and Senior Programme Manager of the International Conference on the Great Lakes Region (ICGLR) in October 2019. He is holder of a Master's Degree in International Relations from the Webster University - Leiden, Netherlands, and a Master's degree in Business Administration MBA from the University of Khartoum - Sudan.

Ambassador Yasir has an experience of 24 years in the fields of diplomacy, international relations, international organizations and administration in Sudan and different parts of the world. He worked in Sudan’s Embassies in Rome (2000-2004), Ndjamena (2006-2008), Muscat (2008-2010), and The Hague (2013-2016). He has extensive knowledge and experience in the fields of international cooperation, development, planning, and partnership building accumulated through follow up of projects and programs with international regional and sub-regional organisations such as IFAD, Food and Agricultural Organization (FAO), World Food Programme (WFP), Organization on the Prohibition of Chemical Weapons (OPCW), the African Union (AU), Intergovernmental Authority for Development (IGAD), the Common Market for Eastern and Southern Africa (COMESA) and the ICGLR.

He has also served as in various capacities at the Ministry of Foreign Affairs of the Republic of the Sudan and abroad notably, as Head of Sub-regional Organizations Section, Director of African Union Department, Deputy Permanent Representative of the Sudan to the OPCW, and Deputy Head of mission in Sudan's Embassy in Muscat -Sultanate of Oman. He speaks fluent Arabic, English and French.