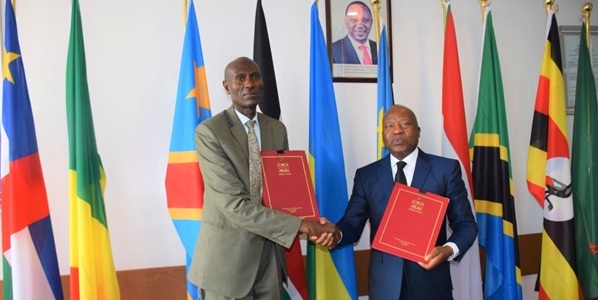 On the 31st January, 2022, in Nairobi, Kenya, the International Conference on the Great Lakes Region (ICGLR) and the Government of the Republic of Kenya signed a Host Country Agreement for the Secretariat of the ICGLR Regional Youth Forum. The ICGLR was represented by Amb. João Samuel Caholo, Executive Secretary, while Amb. Raychelle Omamo, SC, EGH, Cabinet Secretary for Foreign Affairs, signed the Agreement on behalf of the Government of the Republic of Kenya.

The Host Country Agreement comes as President of the Republic of Kenya, H.E. President Uhuru Kenyatta offered to host the Secretariat of the Region Youth Forum and to meet the initial cost of its establishment during the ICGLR Special Summit held in Nairobi on 24th July 2014.  Thus, the Agreement provides for regulation on the establishment and functioning of the Regional Youth Forum and its relations with the Republic of Kenya.

The ICGLR Heads of State and Government endorsed the creation of the Regional Youth Forum to champion the interests of the youth at the national, regional and global level.  This Agreement, further, ensures that the youth are not only involved but are actively engaged in all political processes and decision-making that affects them and the region at large.  It will also strengthen young people’s role in preventing and resolving conflicts, violence and extremism is essential to building sustainable peace and development for all the people in Great Lakes region.  In addition, it will also boost the exchange of ideas, networking and interactions between the youth in the region and within Member States.  Above all, the Host Country Agreement will greatly contribute to the realization of the Pact on Security, Stability and Development signed in 2006 by the Heads of State of the Great Lakes region.