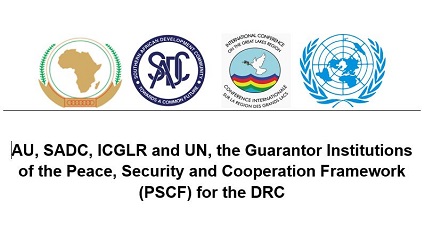 The PSCF Guarantors (UN, AU, ICGLR and SADC) strongly condemn the recent attacks by the ex-M23 rebels in eastern DRC and urge the group to definitively cease all hostilities.

The Guarantor Institutions of the Peace, Security and Cooperation Framework (PSCF) for the Democratic Republic of the Congo (DRC) and the region, signed in Addis Ababa, Ethiopia, on 24 February 2013, namely the International Conference on the Great Lakes Region (ICGLR), the Southern African Development Community (SADC), the African Union (AU), and the United Nations (UN), strongly condemn the resurgence of attacks by the ex- “Mouvement du 23 Mars” (ex-M23) rebels against positions of the Armed Forces of the Democratic Republic of the Congo (FARDC) and deplore the impact on the civilian population of the violence linked to the activities of armed groups in the eastern DRC.

The PSCF Guarantor Institutions call upon the ex-M23 rebels to silence their guns, once and for all; to cease all hostilities, in line with the Nairobi Declarations of 12 December 2013; and to engage resolutely and peacefully in the process of voluntary and unconditional disarmament, in accordance with the Disarmament, Demobilization, Community Recovery and Stabilization Program (PDDRCS) and its implementation strategy as well as the decisions of the Summits of the Regional Oversight Mechanism of the PSCF, particularly those held in Brazzaville, Republic of Congo, on 19 October 2017, and in Kinshasa, DRC, on 24 February 2022.

The PSCF Guarantor Institutions deplore the fact that the activities of armed groups operating in the eastern DRC continue to fuel a climate of mistrust between the countries and the populations of the region, thus hindering their collective efforts towards a Great Lakes region free of the horrors of war and resolutely focused on sustainable development. They call on the various stakeholders to maintain the promising momentum that has characterized relations between the countries of the region in recent years and to prioritize regional frameworks for resolving differences, particularly with a view to eradicating the threat posed by these armed groups, through a comprehensive approach, including non-military measures aimed at also tackling the root causes of persistent instability.

In this regard, the PSCF Guarantor Institutions welcome ongoing consultations at various levels within the region for a sustainable solution to the presence and activities of negative forces in the region. They reiterate the need for dialogue and sustained efforts to strengthen trust among all stakeholders of the region and encourage them to mobilize existing bilateral and regional mechanisms and frameworks, such as the Expanded Joint Verification Mechanism (EJVM), with a view to further strengthening information exchange, coordination and cross-border collaboration. They also reiterate their full commitment to accompany the efforts of the DRC and all the countries of the region to preserve the progress made to date in regional relations and to put an end to the threat posed by the armed groups.

The PSCF Guarantor Institutions express their condolences and their solidarity with the families of the victims, the FARDC soldiers who died during the attacks and the peacekeepers of the UN Organization Stabilization Mission in the DRC (DRC) who lost their lives in a helicopter crash during a reconnaissance mission in the conflict zone.